What is Canola Oil

Learn more about the world’s healthiest cooking oil in this two minute video.

“Heart-healthy, affordable and ideal for any type of cooking.”
Canola oil comes from the seeds of the canola plant. Once harvested, canola seeds are crushed and the oil contained within the seed is extracted. The average canola seed is 45% oil.

Canola oil is heart-healthy. It has the least saturated fat of any common cooking oil. In fact, it has less than half the saturated fat of olive or soybean oil. The US Food and Drug Administration (FDA) authorized a qualified health claim for canola oil’s ability to reduce the risk of heart disease when used in place of saturated fat. Click here for more information about canola oil’s health and nutritional characteristics.

Canola oil is ideal for any type of cooking. From salad dressings to sauting, canola oil’s neutral taste and light texture make it a great match for just about everything. Furthermore, its high heat tolerance means you can use canola oil for anything from baking to stir-frying to deep-frying or grilling.

There is a global need for healthier foods. With worldwide issues like cardiovascular disease and diabetes, a simple change like using a healthier cooking oil can make a significant difference.

There is a consistent, reliable supply of canola oil available to help make our world a healthier place.

Where does canola oil come from?

Canola oil comes from the crushed seeds of the canola plant. Canola is part of the Brassica family. Cabbages, broccoli and cauliflower are also part of this same botanical family. Each canola plant grows from 3 to 6 feet (1 m -2 m) tall and produces beautiful yellow flowers. As the plant matures, pods form that are similar in shape to pea pods, but about 1/5th the size. Each pod contains about twenty tiny round black or brownish-yellow seeds.

Once harvested, canola seeds are taken to a facility where they are crushed to extract the oil contained within the seed. This oil is then further refined and bottled as canola oil. Basic characteristics of this cooking oil include a pale golden color, light texture, neutral taste and high heat tolerance. The average canola seed is 45% oil. The remainder of the seed, which is very high in protein, is processed into canola meal and used as a high quality animal feed. 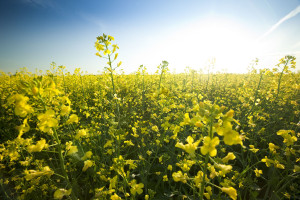 Farmers have been growing canola for almost 40 years.

Where is canola grown?

Canola is grown primarily in the prairie regions of Western Canada, with some acreage being planted in Ontario and the Pacific Northwest. Smaller volumes are also grown in the North-central and South-eastern United States.

Canola is different from rapeseed

In the early 1970s, canola was developed using traditional plant breeding techniques to significantly reduce the levels of erucic acid and glucosinolates that were found in the parent rapeseed plant. The name “Canola” is a contraction of “Canadian” and “ola”, which means oil.

There is a strict internationally regulated definition of canola that differentiates it from rapeseed, based upon it having less than two percent erucic acid and less than 30 micromoles of glucosinolates. Oilseed products that do not meet this standard cannot use the term canola. High erucic acid rapeseed acreage, although still grown, is now confined to production under contract for specific industrial uses, including environmentally friendly lubricants.

Canola oil has generated a lot of research interest into its potential health benefits because of its low level of saturated fat, high monounsaturated fat and good balance of omega 3 and 6 fats. Click here for a directory of canola oil-related nutrition research.