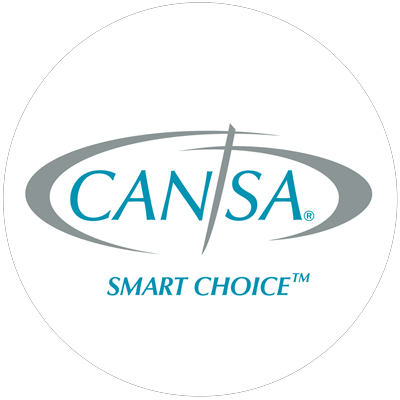 CANSA has awarded the CANSA ‘Smart Choice’ Seal to all canola oil and canola margarine brands (produced from South African grown GMO-free canola) for almost 20 years. Analysis of peer-reviewed literature has informed CANSA that the good balance between omega-6 and omega-3 fatty acids found within Canola oil could help to reduce the risk of cancer (1).

“In all these years there hasn’t been a single credible report anywhere in the world that canola oil is toxic or unfit to consume. CANSA respects the Food Safety Division of the National Department of Health (DoH) who has never issued any warning concerning canola oil, nor has any other similar body in the world. ‘In fact, in 2011 the DoH’s Director General Ms MO Matsoso, approved the CANSA ‘Smart Choice’ Seal,” says Carl Albrecht, Former CANSA Head of Research.

Canola oil has also been evaluated for safety by other food safety authorities such as FSANZ (Food safety, Australia and New Zealand) (2) the FDA (United States Food and Drug Administration) (3), Health Canada (4), the OECD (The Organisation for Economic Cooperation and Development) and EFSA (European Food Safety Authority) (5, 6).

Canola Oil is Not Toxic

Taking all of this into consideration CANSA was concerned to read in the book ‘The Real Meal Revolution’, by Prof Tim Noakes and co-authors (on page 49) that canola oil was considered to be toxic and should be avoided.(8) Correspondence with the editorial team revealed the notion held by the latter, that canola oil contained excessive amounts of (0.56 to 4.2%) of toxic trans fats which were formed during purification and specifically during deodorisation of the crude canola oil at high temperatures. The data referred to was obtained at the Food Science and Human Nutrition Departments of the University of Florida in 1994 by O’Keefe et al. and no reasons were given why two of the seven canola oil samples analysed had values above 2% for trans fats and the other did not (9).

O’Keefe et al. did not refer to the heated canola oil as being toxic (9). In order to find out what the trans fats situation was in South Africa, CANSA commissioned a number of studies. Trans fats were measured in 40 different margarines by the CSIR. Not a single margarine showed trans fats levels above 2% (10), being the legal limit for food in South Africa (10)

In addition, CANSA requested a senior lipid scientist at a South African university to analyse various canola oil samples for trans fats and found that the amount of trans fats was below 1% in crude, purified and commercial canola oil. In other words, none of the samples exceeded 1% trans fats which is far less than the highest values recorded by O’Keefe in Florida (9).

In South Africa less than 1% trans fats is legally referred to as ‘trans fat free’ (11) – therefore the amount of trans fats in the canola oil analysed for CANSA, in South Africa, is well within the legal limit and cannot according to logic and scientific analysis be called toxic.

Albrecht added, “The same conclusion was reached for the 40 margarines containing canola, as well as sunflower seed oil from at least five different companies. The fact that all the latter were below the legal limit for trans fats is remarkable. There’s no credible evidence from any source, whatsoever, that South African canola oil is toxic. If there was, we’d expect the Department of Health, Food Safety Division, as well as the supermarkets, to immediately remove canola oil from the shelves.”

A beneficial and ‘high in’ omega 3 food such as canola oil with a superior fatty acid composition cannot be labelled toxic, based on flimsy, non-peer reviewed and non-replicated evidence from research conducted 20 years ago in the US. CANSA will continue to recognise and support local canola oil and canola margarine with the CANSA ‘Smart Choice’ Seal – as it has done for many years.